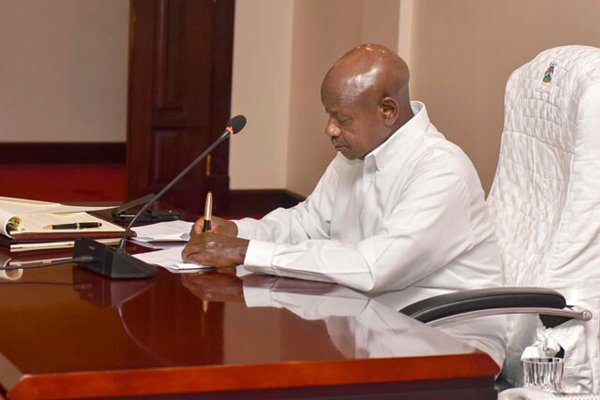 However, critics say the amendment of the law contravenes the Constitution and muzzles media freedoms and freedoms of speech.

Ibrahim Nganda Semujju , the member of parliament (MP) for Kira Municipality and spokesperson for the opposition; Forum for Democratic Change (FDC) party, while appearing on a local FM Radio station talk show on Saturday, said the law was not brought in good faith.

“The law undermines the rights of citizens to freedom of speech and expression as enshrined in the Ugandan 1995 Constitution and other International laws, for which Uganda is a signatory,” he said.

Gorreth Namugga, MP for Mawokota County, said she has organized a team of legislatures and activists opposed to the law to seek legal redress and challenge this law in court.

“We shall not sit back and see draconian laws being signed to jeopardize the democracy and human rights of our people”, she said.

On his part, Robert Ssempala, Human Rights Network for Journalists (HRNJ) Executive Director, said the law curtails the activities of investigative journalists who carry out their duties undercover.

“How can an investigative journalist seek permission to photograph from a parent of a child being subjected to torture by the very parent?”, he asked.

The amended computer misuse law prohibits anyone from taking pictures of young children without seeking permission from their parents or guardians.

The Bill, which now becomes an Act of Parliament was passed by the August House on September 8, 2022, amidst criticism from several human rights defenders, who argued that it was drafted in bad faith. They say the law is aimed at protecting the corrupt while penalizing those demanding accountability from their leaders.

The amendment bill was introduced by Kampala Central Member of Parliament, Muhammad Nsereko.

The bill listed punitive measures against people who send malicious information, hate speech, unsolicited information, and share information about children without the consent of their parents or guardians.

The law in addition stipulates that; recording a person’s voice or video without permission, or unauthorized access to their personal information is a criminal offense.

The punishment for the convicted person is Shs15 million ($4285) or a seven-year jail term, or both.

The Kampala Central Member of Parliament who introduced the bill, Nsereko has defended the law, saying it will regulate social media and other media platforms, especially when it comes to propagating fake news. He said the law will make people who want to take up leadership positions responsible and discourage them from sending and publishing malicious, fake, and derogatory messages.

“We are not talking about responsible journalism; who know their professional ethics. People know how to sue media houses or journalists”, he said.

Nsereko also said there are laws protecting journalists; where and how to get their information.

Other laws signed alongside the computer misuse amendment bill include; the Physical Planners’ Registration Act, 2022, the Kampala Capital City (Amendment) Act, 2022, and the Mining and Minerals Act, 2022

“The four bills were recently passed by the Parliament of Uganda and were awaiting President Museveni’s assent,” a statement from State House reads in part.