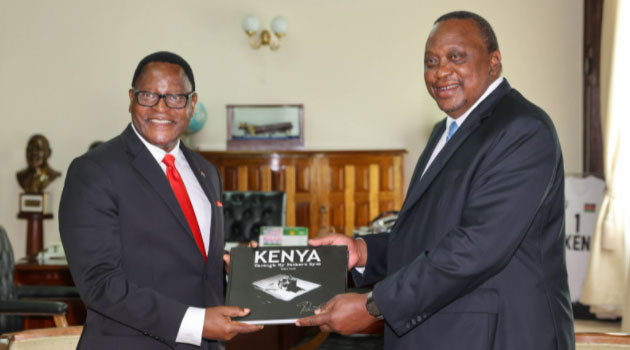 Kenya and Malawi have reignited their bilateral relations including trade and investments by signing eight new treaties.

The agreements were signed Thursday afternoon at the State House, Nairobi, at the end of bilateral talks between Kenyan and Malawian delegations led by President Uhuru Kenyatta and his Southern Africa counterpart Lazarus Chakwera.

The eight agreements cover broad areas of cooperation between Kenya and Malawi in politics, diplomacy, defense, fisheries and aquaculture as well as cooperative development. Others include technical cooperation in health and tourism.

“Through these multilateral platforms Kenya, Malawi and other African countries have an excellent opportunity to explore tangible approaches to build strong and resilient African economies, post Covid-19,” President Kenyatta said.

President Kenyatta said the pacts would enable Malawi and Kenya to take advantage of the African Continental Free Trade Area (AfCFTA) the new continent-wide free trade that took effect from January this year. Kenyan industrialists said earlier they are seeking new trade linkages that will allow them to establish joint ventures with Malawians, beating official and unofficial barriers to trade.

The pacts come at a time Kenyan manufacturers have been scouting for cheaper channels of getting goods into Malawi in a campaign that has sought to significantly improve the volume of exports to the southern African countries.

Trade between the two nations was valued at Sh7 billion last year with Kenya holding the bigger share of Sh4.1 billion. Imports from Malawi stood at Sh2.98 billion during the same period.

On his part, President Chakwera regretted that the strong historical ties between Nairobi and Lilongwe had been dormant for a long time, expressing confidence that the signing of the eight agreements would help reignite mutually beneficial relations.

President Kenyatta concluded that collaboration and consolidation of ties between the two countries would guarantee socioeconomic growth for their citizens and the African continent as a whole, calling for effective implementation of the newly signed agreements.