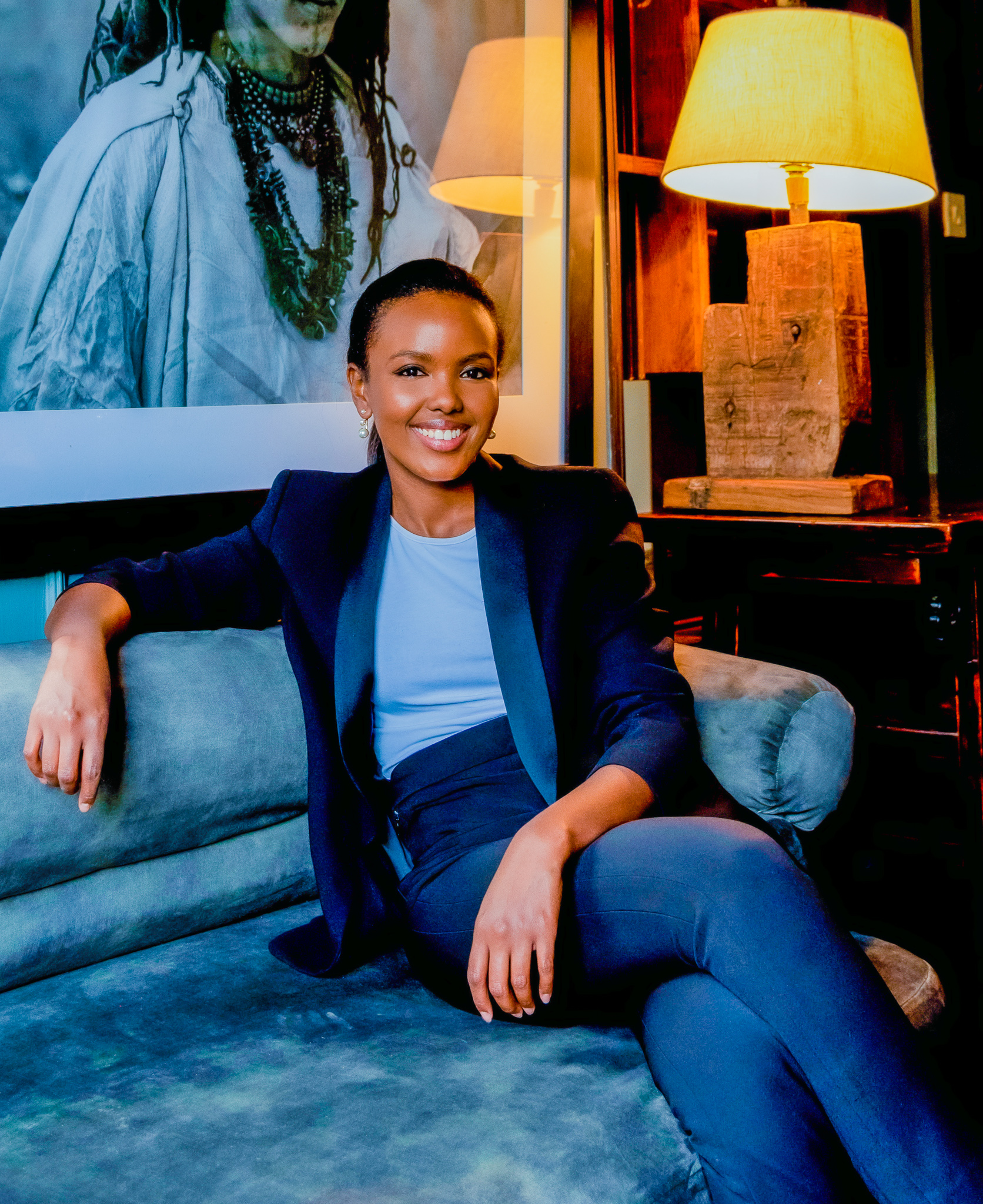 One day, Jihan Abbas, founder CEO, Griffins Insurance, was, as she has done countless times before, sat at a Mombasa restaurant for a meal. For some reason on this day, she struck up a conversation with the waiter. Naturally, because it’s Jihan, the topic veered into insurance territory. Here was the moment where she discovered that her waiter, like all the others circulating tables in the restaurant, was in the very precarious position of not having a medical cover. Now, Jihan thought of health insurance as so fundamental as to be primal. She left the eatery a disturbed soul. One who knew for sure there was a problem in need of urgent solving.

She also intuitively knew right on that technology would come in handy in solving her waiter’s conundrum just as it would resolve millions of other Kenyan’s problem of not having even the most basic of insurance policies. To fix this gap, Jihan founded a fully digitised insurance firm locally. One that she intended would eliminate all the barriers of lack of insurance seeing how only about 3 per cent out of a population of 47 million was insured. This should therefore be a story with a happy ending. Jihan swooped in and saved the waiters of this world, right? Not so fast. After her life-altering meal, Jihan went and did a heck of a lot of research. The statistics shocked her. Just like the 3 per cent likely shocked you. She realised that less than 2.8 per cent of Kenyans benefit from insurance despite the market playing host to well over fifty insurance companies battling it out.

Before the ‘birth’ of Griffins Insurance, there was talk. And a whole lot of talk it was. Conversations around this mythical beast, digital insurance. Except it sounded so far-fetched because the market was populated with reserved, extremely conservative players. Jihan could not have possibly found harder ground to plough. While some of her Millennial peers were grinding their way out of a quarter-life crisis, Jihan was building the first-ever digitised Kenyan insurance firm in 2016. She is presently 26 so you do the math. Her car insurance company lets customers pay in instalments, with a clause to pause coverage should they travel.

The combination of moving into the tech world and simultaneously into the world of insurance was an obvious challenge for anyone, not just a very young woman fighting stereotypes. Soldiering on, Jihan turned stone after stone, penetrating not just the ultra-conservative industry, but persevering through traditionally older-male spaces.

Born and raised in Mombasa, Jihan would later leave the country to pursue her undergraduate degree graduating with a BSc (Hons) Investment and Financial Risk Management. She then segued into Saïd Business School, the University of Oxford for her Master of Business Administration (MBA), graduating in 2019. Here she had been a Saïd Foundation Scholar and perhaps inevitably, co-chair Entrepreneurship and Innovation Oxford Business Network. She then opted to work in finance as a Commodities Trader in London, trading on the New York and London sugar markets, something she says seemed like an ideal job for her.

Things changed with that one priceless dining experience. We must all thank this waiter and the gods for what transpired. Along with her 2.8 per cent research findings, because that number bears repeating, she further learnt only about 19 per cent of Kenyans were under a mostly low-cost government scheme. This is reiterated in a 2018 paper in the academic journal Health Systems and Reform. The two realisations made for a lightbulb moment that would eventually inform the inception of Griffins Insurance

The thing about Jihan is, she did not waste this moment of awakening. She instead put together with whom she dove into detailed investigation to tackle this distressing problem of low insurance penetration across Kenya and the larger Africa. She subsequently started mapping out how to build the necessary infrastructure for insurance to be made more accessible, affordable and simple to use to its beneficiaries. “We built the Lami platform (the technology that powers the Griffin app), then launched the Griffin Motor app at the end of January 2020. Later on, in February, we launched Bima Teke Teke, an app for matatu drivers to buy insurance.” We, (Kenyans), she intimates, are lucky to have a booming technology ecosystem in the country. One of the most vibrant in Africa. One she believes to have given her an upper hand and even accelerated the development of the digital insurance platforms. “Digital insurance can drive down the cost of all forms of insurance because it increases the transparency of data and analytics. This is especially useful in Kenya where only 1 in 5 people are estimated to have basic insurance cover like health insurance.”

Like any other pioneer – and in her case, it could be fittingly described as prodigious – Jihan does not see her own footsteps or the reverberations felt across the insurance industry when she did what she set out to do. What she sees and is focused on, is her vision to play a central role in providing a safety net for Africa’s uninsured.

She intends to fully democratise insurance through digitisation and by making it economically viable to such an extent that it will reach a greater segment of said population and even beyond. Lami Insuretech is a slice of insurance technology that exclusively distributes digital insurance products. As an application it targets the over 1 million Kenyan drivers queueing for service, intending to shift them over to the digitised realm of car insurance.

Griffin Insurance recently released its flagship mobile application. It allows customers to buy their insurance policies in less than two minutes. Claims processing is to be done in a week rather than the industry standard of 30 days. “For the first time, Kenyan drivers will be able to buy their car insurance policies, with just a few simple clicks. They will read a clear, transparent policy and purchase extremely flexible insurance covers with adjustable periods and coverage amounts,” she points out. “This is very exciting. It’s been our dream to bring insurance products to smartphone users.” The app features additional powerful services meant to change how drivers and policy-holders interact with cars. There is an in-built smart emergency response option accessible through an in-app help button. The result, it makes clients feel safe. “The in-app help button commands the system to dispatch ambulances, towing trucks or security teams nearest to the motorists across the country,” she says, reading my flat-tyre-in-the-middle-of-nowhere fear.

The Lami platform really does power Griffin’s entire insurance value chain from Know Your Customer (KYC) to pricing, underwriting, and claims into a single platform and an API that can be embedded into any front end or point of sale. It also allows others to create and distribute digital insurance products in record time, allowing users to take insurance products to market in as little as four weeks. Lami provides that which did not exist before a digital insurance ecosystem that industry players can use to fast forward their digital transformation. Basically, Jihan was looking at the bigger picture when she created Lami.

She fondly reminds me that she didn’t have to join the technology space seeing how she grew up in it. “IT is not something I joined but rather grew up with like most people around me. However, I came across problems, mainly in terms of the lack of a safety net for quite a number of people around us, which I felt could be solved best using technology.” Her spry spirit has challenged fuddy daddies. She has lassoed technology that will go a long way in helping solve the perennial problem of low insurance coverage in Kenya in a journey was obviously not easy. The insurance industry is not exactly legendary for its light feet.

It had not changed for decades. It needed an injection of joie de vivre and plenty of “youthful interventions” as Jihan bosses up and categorically put it. The solution, as far as she is concerned, will come from those who feel the problem most. “The solution to these perennial problems will come from youth and particularly women, though I am often underestimated and seen as just a young woman out to solve the many issues that have been persistent in this industry.” Come to think of it, what could possibly be wrong with a reputation as a troublemaker? Look at what she’s done so far.

With a definite gender gap in the tech industry, she baldly points out that leadership positions are a “male reserve.” The problem, she says, is young girls and women are not given enough information about the opportunities they can find in tech as a career path for them. This leads to fewer enrollments and therefore, even fewer graduates. A problem, she continues, perpetuated further because of its translation to a smaller number of female mentors to help other women break into the world of tech. “I also think that some women feel like they may not fit in due to the fact that the industry is dominated by men,” she adds magnanimously.

However bleak the situation seems currently, women in technology (WIT), she affirms, is a blossoming flower whose time is yet to come, adding that women in this space are lucky. “Kenya has one of the most vibrant tech ecosystems in Africa. This is critical in nurturing the next generation of women leaders in tech. And can provide an avenue to give women access to resources, networks, opportunities and knowledge all of which are critical in bridging the gender gap.” Like other HerNovators before her, she leaves a challenge to all WIT especially senior management to have a hand in nurturing the next generation of WIT by holding a sister’s hand through the tech highs and lows that break hearts.

This article was first published in the September 2020 issue of CIO East Africa magazine.