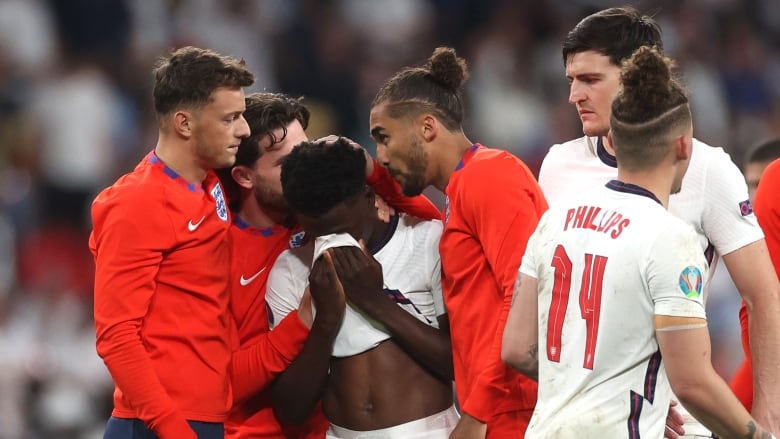 Social media platforms have been swarmed with racist messages and posts directed at three Black players on England’s football team, following a penalty shootout loss to Italy on Sunday in the UEFA Euro 2020 championship.

The two teams battled to a 1-1 tie, and Marcus Rashford, Jadon Sancho, and Bukayo Saka were among England’s players to step up in the shootout to decide the winner of the match and the tournament. All three did not convert their spot kicks.

After the game ended, the players’ social media accounts, including Facebook-owned Instagram and Twitter, were filled with racist comments and messages.

A Twitter spokesperson said the “abhorrent, racist abuse directed at England players” had no place on the platform. Since the end of Sunday’s game, Twitter removed more than 1,000 tweets and permanently suspended a number of accounts — the spokesperson did not say how many — for violating its rules against harassment and hateful content. “We have proactively engaged and continue to collaborate with our partners across the football community to identify ways to tackle this issue collectively and will continue to play our part in curbing this unacceptable behaviour — both online and offline,” the spokesperson said.

A Facebook spokesperson said the company didn’t have numbers to share, but said the platform “quickly removed comments and accounts directing abuse at England’s footballers last night and we’ll continue to take action against those that break our rules.”

England’s Football Association said in a statement Monday that it was “appalled by the online racism that has been aimed at some of our England players on social media.” Anyone behind the “disgusting” behavior is not welcome as a fan, the FA said, adding it was supporting the players “while urging the toughest punishments possible for anyone responsible.”