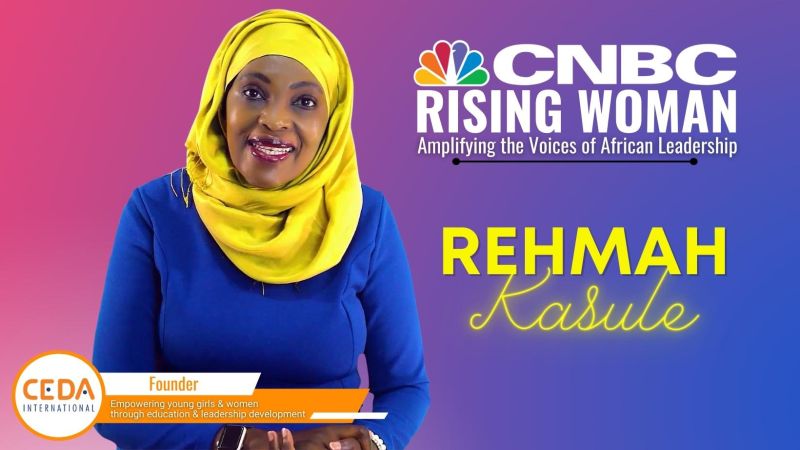 Rehmah Kasule, Uganda’s Founder of CEDA International, is among the 33 women who made it to the 4th edition CNBC Rising Women Series that celebrates visionaries, leaders, entrepreneurs, and creatives across Africa continent who have thrived within their families, communities, and businesses.

She founded CEDA International to empower young girls through education and leadership development. She has mentored over 168,000 women across Africa and has been recognised by President Barrack Obama for her efforts in building generations of ethical leaders and entrepreneurs. Kasule is also an accomplished author with her most recent book discussing women’s role during COVID-19. Organised by Global Group Media, Rising Woman Africa recognises exceptional women for their individual efforts that have impacted Africa’s political, social, and economic developments, along with the arts, healthcare, finance, and other sectors.

“Women leaders around the world are an example of tenacity and diversity. With the world’s recent and urgent challenges, they continue to work towards a more equitable future that opens doors for women and girls,” said Oni Aningo, Executive Director and Founder, Global Group Media and Creator, Rising Women Series.

She engendered the Uganda’s National Export Strategy with cross-sector strategic plans that built resilient and sustainable frameworks for government ministries and trade agencies to develop inclusive growth that mainstreamed women in trade and increased their participation in male-dominated export sectors. She has also served twice as a Wise Head Judge for the MacArthur Foundation 100&Change, a $100 million competition to help solve a critical social problem. Rehmah serves on boards, including StrongMinds, World Connect Inc. USA, and PANGEA Education Foundation.

Rehmah is a social innovator, a gender and youth development expert, and a prolific serial entrepreneur who started her first business, a branding and marketing firm at 26. In 2007, after successfully running her business for 10 years, she shifted from building brands to shifting mindsets and founded CEDA International in Uganda.

Through her visionary leadership and with funding from US State Department, United Nations Democracy Fund and MacArthur Foundation, she has successfully designed and implemented projects in girls’ education, youth development, mentorship, women’s leadership, human trafficking, preventing violent extremism, and active citizenship impacting over 168,000 youths and women on the African continent.

Her work was recognised by President Obama in 2010 and won several international awards including Fortune and Goldman Sachs Global Women’s Leadership Award 2014, and the Islamic Development Bank Women in Peace & Development in 2018. Rehmah was also named one of the Most Influential African Women in welfare and civil society in 2016 by CEO Global.

Rehmah is a graduate of Peace, Conflict and International Development, an Aspen Leadership Fellow, Senior Synergos Fellow, VVLead Fellow and a Global Ambassador for Let Girls Learn, a Michelle Obama initiative. Her book From Gomba to the White House has equipped over 3 million young people with tools to discover who they are, dream big, design goals, develop key skills that lead them to rewarding destinies.

During her Fellowship, the Advanced Leadership Initiative at Harvard University, she designed the PLUS+AFRICA Leadership and Employment Linkubator to create employment pathways for 1 million youth in Africa by 2030. The social venture is focused on the Future of Work and collaborates with the private sector and governments to strengthen the education-to-work and entrepreneurship eco-systems in Africa.