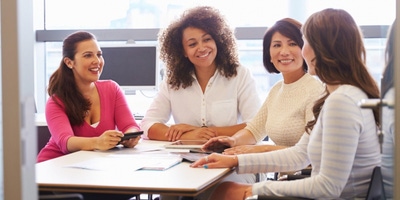 Nearly 3 out of 4 women currently rely on word-of-mouth to market their products and services according to a recent Mastercard study.

The study’s findings were revealed at the inaugural women’s business workshop hosted by Mastercard and Female Fusion at Expo 2020 Dubai’s Women’s Pavilion.

Mastercard, being the Official Payment Technology Partner of Expo partnered with Female Fusion Network to unveil the new research as a first in a series of workshops for the region’s female entrepreneurs at the world’s largest cultural gathering.

“The findings from the study indicate a clear need for further education and empowerment. Mastercard has long pushed for the success and growth of women as we break gender barriers around the world,” said Ngozi Megwa, Senior Vice President, Digital Partnerships MEA, Mastercard.

Held at Expo 2020 Dubai’s Women’s Pavilion, in collaboration with Cartier, the session focused on the power of the digital economy in enabling women-owned businesses to go online. In a study conducted among Female Fusion’s network of 20,000+ members across the region, it was revealed that 95 per cent of women SMEs in the region identify social media channels as the top tool for their business ventures. Other channels include their own e-commerce websites (72 per cent) as well as messaging services such as Facebook and Whatsapp (50 per ent).

“Digital tools and technologies are the greatest equaliser for businesses and as the shift towards e-commerce becomes increasingly permanent, we are committed to helping women businesses go digital and grow digital as they pursue their entrepreneurial passions,” Megwa added.

In addition, three out of four (72 per cent) women-owned businesses said they rely on word of mouth to market their products and services. The workshop identified how SMEs can make the most of their online footprint, and better connect to their consumers in a digital economy.

The recent unveiling of the inaugural Mastercard MEA SME Confidence Index also revealed that in terms of a digital footprint of the region’s women entrepreneurs, social media (71 per cent) leads the way followed by a company website (57 per cent).

“We are proud of the successful launch of our workshop series in partnership with Mastercard. As a growing community of ambitious women leaders, Female Fusion Network looks to support our members with access to platforms that offer simple yet effective takeaways for them to grow their business. We look forward to having more of these impactful sessions during Expo 2020 Dubai,” said Jennifer Blandos, Managing Partner, Female Fusion Network.

Mastercard has made a global commitment to connect 25 million women entrepreneurs to the digital economy by 2025 as part of its goal to build a more sustainable and inclusive world. As part of its efforts, the technology leader recently launched ‘The Entrepreneur’s Odyssey’ a first-of-its-kind digital education platform that brings together a range of world-class academic and business resources to help small businesses learn and thrive.