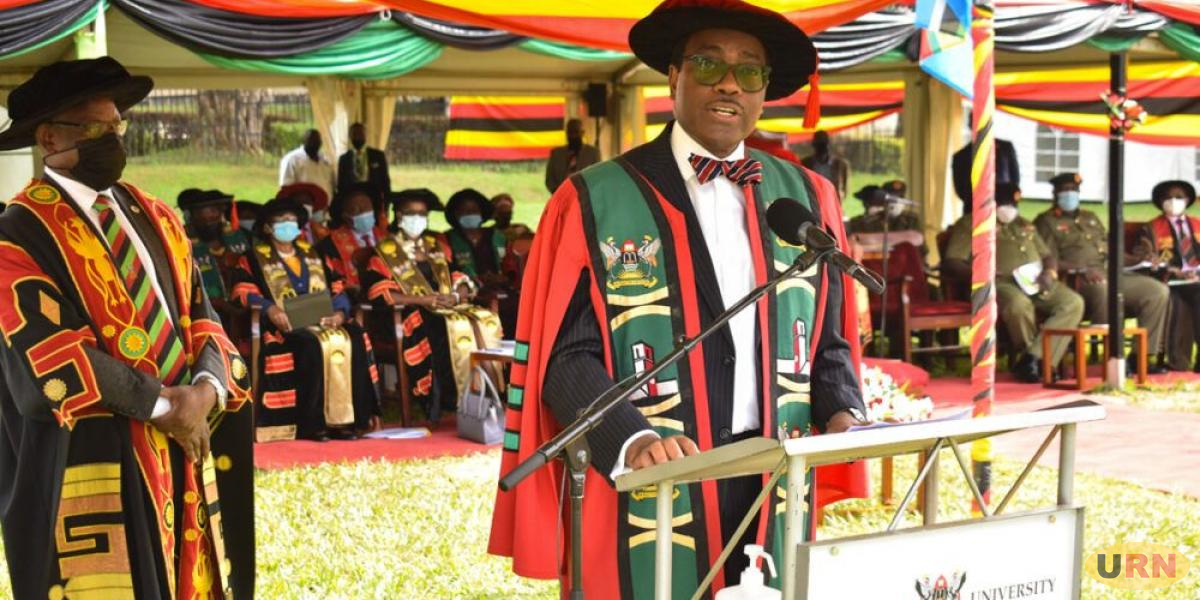 Makerere University has awarded Dr Akinwumi Adesina, President of the African Development Bank (AfDB), with an Honorary Doctorate degree in recognition of his distinguished contribution to Africa’s transformation and contribution to science, research, and academic leadership.

The Bank’s President received the prestigious award of the Honorary Doctor of Letters during the University’s fifth session of the 71st graduation ceremony held in Kampala. “I will cherish this Honorary Doctorate from Makerere University as it will always bring back for me great memories of my work and partnership with the university,” Adesina said in his acceptance speech.

Dr Adesina was feted for supporting scientists and researchers at the University’s Food Technology Department, helping to innovate in the production of shelf-stable flour produced from the national staple, the bananas, which could be turned into mashed banana meal known locally as matoke. The AfDB President recalled his work in Uganda as the Associate Director of the Rockefeller Foundation when he engaged the University faculty members in undertaking research on food technologies.

The work done on the banana tissue culture, which was geared towards making the banana plantations in Uganda much more economically productive and disease-free, also earned Dr Adesina accolades. The good doctor said farmers across Uganda were supported to access the tissue-cultured bananas through a financing programme which he helped to set up. The programme was scaled up by the Centenary Rural Development Bank, and out of all the farmers who received their loans, none defaulted on their payments.

The Doctorate award in recognition of Dr Adesina’s distinguished contribution to science, research, and academic leadership has also been replicated in the Bank’s innovative financing to agriculture. The University acknowledged the Bank President’s contribution towards catalysing Africa’s social and economic progress, helping to build partnerships, networks, and advocacy for Africa’s development.

In 2019, the African Development Bank invested $96 million in the Higher Education and Science and Technology Project, which benefited the Makerere University. The Chair of Makerere University Council, Rhona Magara, also hailed Dr Akinumi Adesina for his selfless efforts in supporting development work in Uganda and Africa.

The University was able to construct central teaching facilities with a holding capacity of 1,000 students, including auditoriums and seminar rooms from the $26 million which was part of the project funded by the Bank. Dr Adesina recalled that some of the University programmes have grown into world-class programmes attracting collaborators from various universities.

He acknowledged the contribution of distinguished scholars including Professor Bernard Bashasha, Principal of the College of Agriculture and Environmental Sciences for advancing research in the field.

The AfDB President urged the University to work towards increasing the number of female students enrolling for masters and Ph.D. programmes saying Africa’s development would accelerate with more women in positions of leadership.