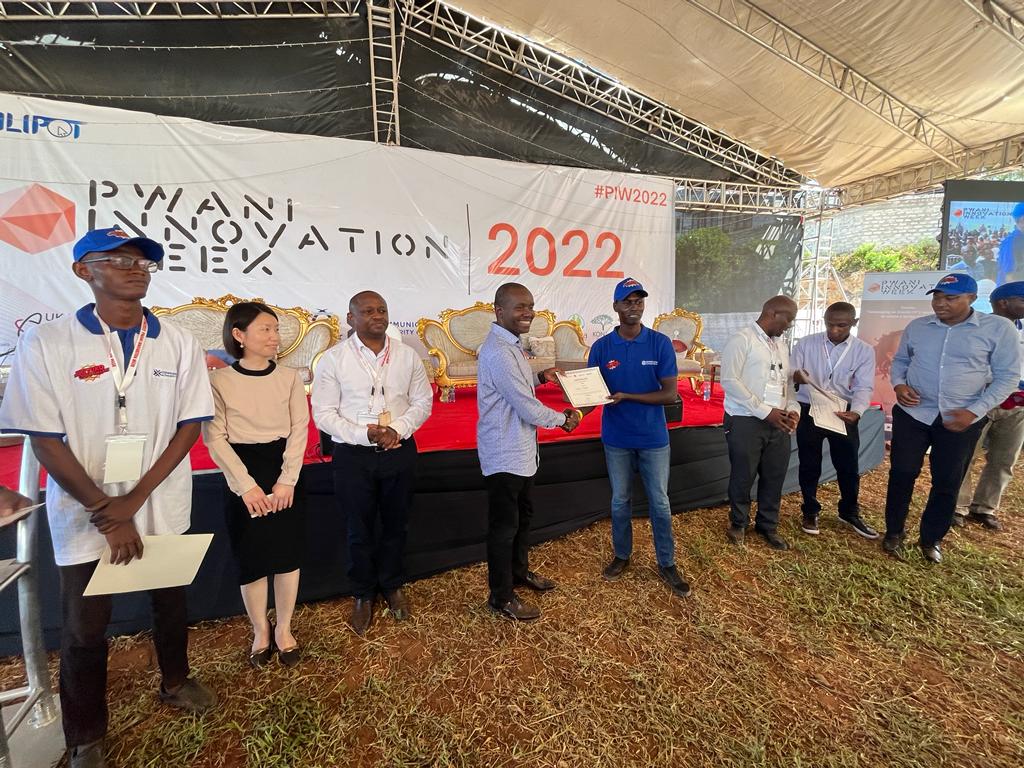 ICT Cabinet Secretary Joe Mucheru presenting a certificate to one of the winners.

The Communications Authority (CA), Safaricom Limited, and Huawei Technologies awarded promising students who excelled in their bootcamp that commenced two weeks before the Pwani Innovation Week.

The students who all participated in groups of three from different universities were awarded during the second day of the Pwani Innovation Week by the Cabinet Secretary for Information Communications Technology (ICT), Joe Mucheru. The CS had attended the event to officially open it after it had gone to a two-year hiatus following the effects of the COVID-19 pandemic. The CAS for the same ministry, Nadia Ahmed Abdalla, who hails from the Coastal region was also present.

Peter Maina, Brenda Mechama, and Solomon Muthara were the group that held the first place in the competition. They all got perfect scores in the cybersecurity mock examination giving them 30 for the final score, and scored 48 in the Practice E-lab with 17 in the K.E CIRT quiz. They had a final score of 95.

Ayub Mohammed, Muishmail Kipkoech, and Charles Koome came third with a collective score of 90.1. This group that had the 2nd runners up place scored 29.1 in their cybersecurity mock examination, 46 in their Practice E-lab exam and a 15 in their K.E CIRT Quiz.

While awarding them their prizes, ICT CS Joe Mucheru appreciated the talent that exists in the coastal region urging the leaders in the region to mentor the students and grow their talents.

The competition attracted a lot of students around the coastal region with only 8 groups of three students each getting to the finals.

The Pwani Innovation returned this year after it had been distracted by the pandemic causing its absence in 2020 and 2021.

This year’s event was organized by the Swahilipot hub and was held at the hub as well.