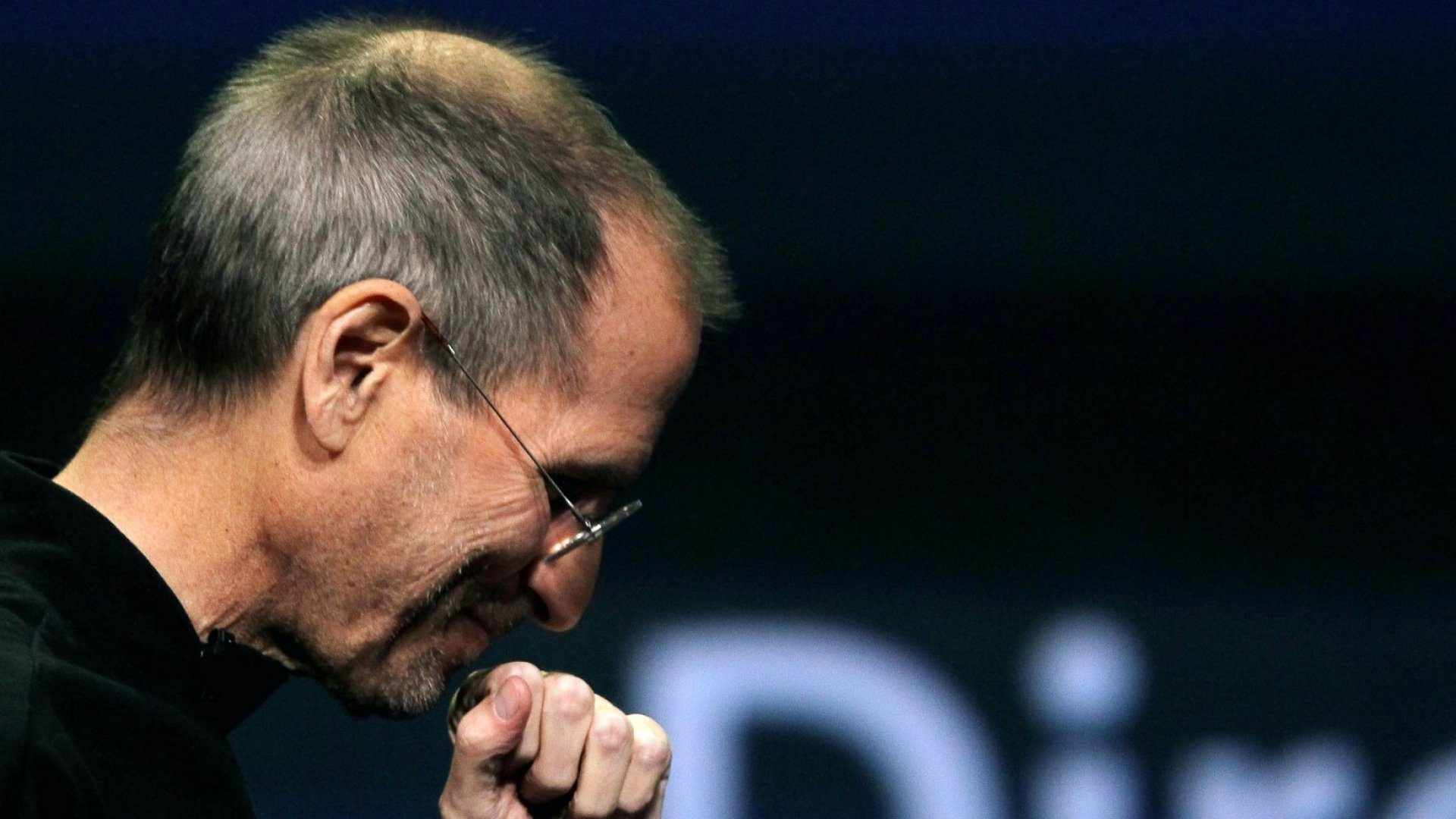 When Android was launched a few months after Apple’s iPhone first came into the market, Steve Jobs swore to destroy android. The Apple CEO said “I’m going to destroy Android, because it’s a stolen product. I’m willing to go thermonuclear war on this.”

Steve Jobs is so far losing the ‘thermonuclear war’ as Android is preferred by more people from across the world. When the Apple CEO declared the war against Android, it created an archetypal binary that had people choose whether they preferred Apple or Android.

There are other various cases of archetypical binary in the world where people have created a narratie of it’s us versus them. Men Vs Women. Labour versus Capital. Tea Vs Coffee. Today, you can add Apple Vs Android to that list.

If you are an iPhone person, you appreciate the sleekness and simplicity of its design, and you are horrified by the confusing mess that is the Android operating system. If you are an Android aficionado, you pity the iPhone user, a captive of an overly expensive closed ecosystem, designed to extract money from its users.

Big Think looked at this classic feud between the two tech firms from all angles and concluded that Android dominates Apple. If the contest is based on the number of countries, Android wins. In all, 74 of the 142 countries surveyed prefer Android. Only 65 favor Apple. That’s a 52/48 split.

Let’s take a look at this feud continentally and see where each dominates the most.

Here in Africa, Android wins by 17 countries versus Apple’s 15, according to Big Think’s report. There’s a solid Android block running from South Africa via DR Congo all the way to Ethiopia. iPhone countries are scattered throughout the north (Algeria), west (Guinea), east (Somalia), and the south (Namibia).

Android could easily dominate in Africa because iPhone products in the continent are costlier leaving Apple products for the selected few. In fact, Apple products are used to define social classes in most African countries where these products are left for only those who can afford them. 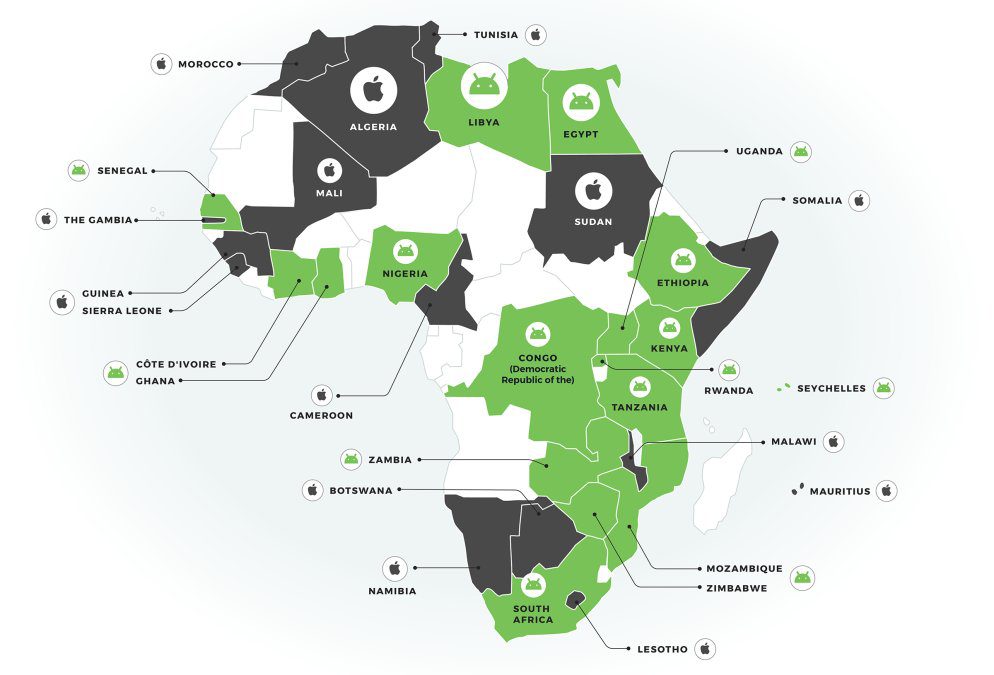 In the Middle East and Central Adia, Android wins 8 countries to Apple’s 6. It is, however, complicated as someone from Turkey noted that iPhones seem to be more popular in the Asian half of Istanbul, while Android phones prevailed in the European part of the city.

The phone divide matches up with the region’s main geopolitical one: Iran prefers Android, Saudi Arabia the iPhone. 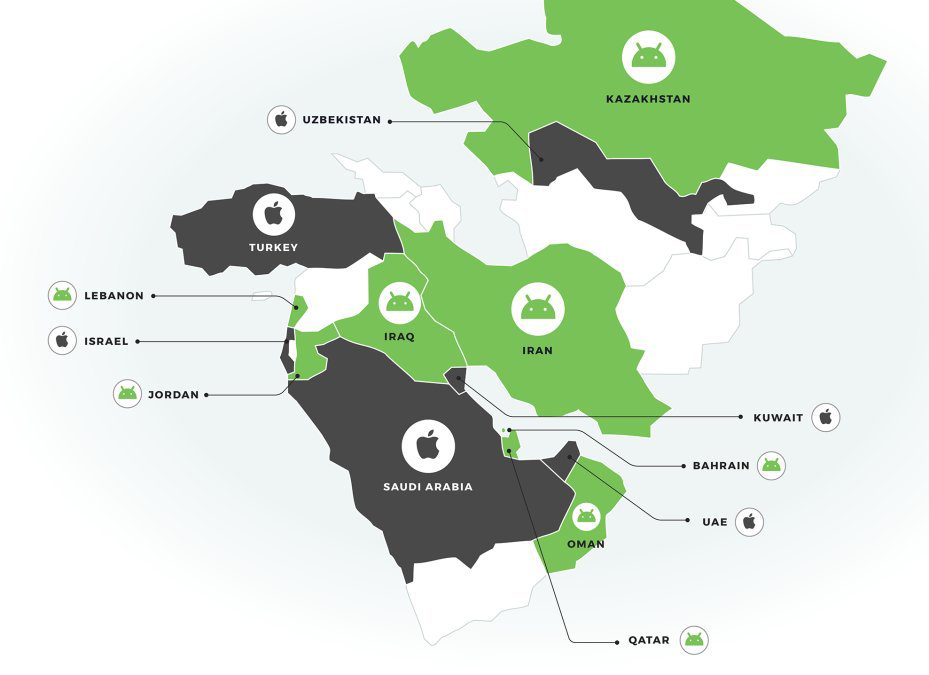 Another wafer-thin majority for Android in the Asia-Pacific region: 13 countries versus 12 for Apple. The two giants of the Asian mainland, India and China, are both Android countries. Apple countries are on the periphery.

And if India is Android, its rival Pakistan must be Apple. Same with North and South Korea.

Experts point to the fact that both operating systems are becoming more alike with every new generation as a potential resolution to the conflict. But as any student of human behavior will confirm: smaller differences will only exacerbate the rivalry between both camps. 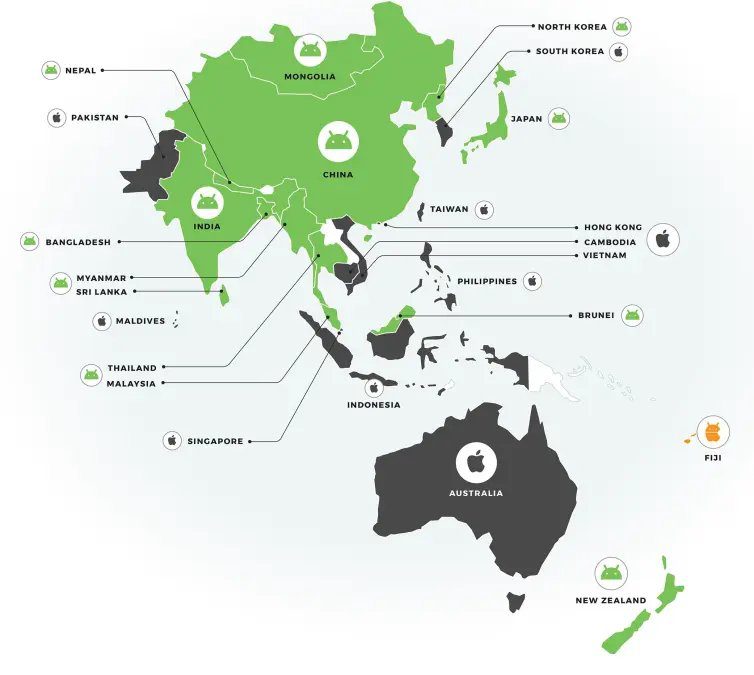 In the United States, there’s a divide in this. There can be only one winner per state, though, and that leads to this preponderance of Android logos. Apple dominates in 19 states while Android dominates 32 states. 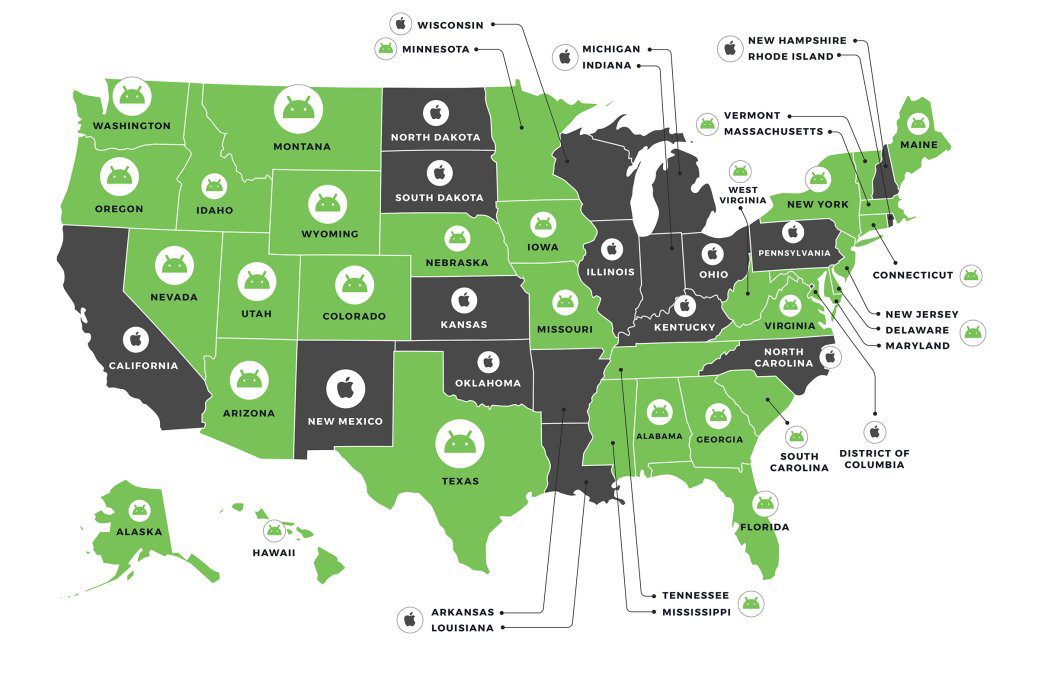 Only eight of North America’s 21 countries surveyed fall into the Apple category. The U.S and Canada lean on Android, while Mexico goes for the iPhone.

Central America is also kind of divided, but there too Android wins hands down, 5-2. 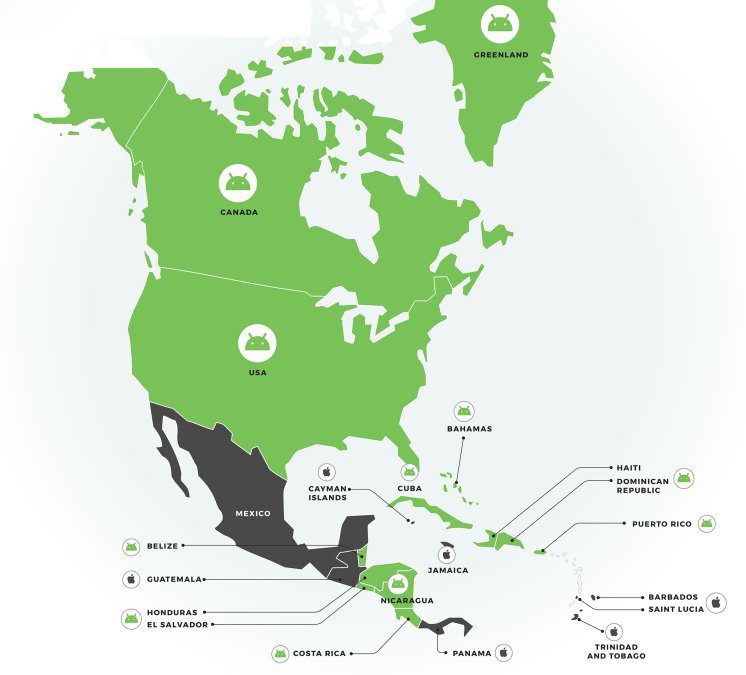 In Europe, Apple wins, with 20 countries preferring the iPhone while only 17 going for Android. Of Western Europe’s Big Five markets, three (UK, Germany, Spain) are pro-Android, and two (France & Italy) are pro-Apple. Czech Republic and Slovakia are an Apple island in the Android sea that is Central Europe. 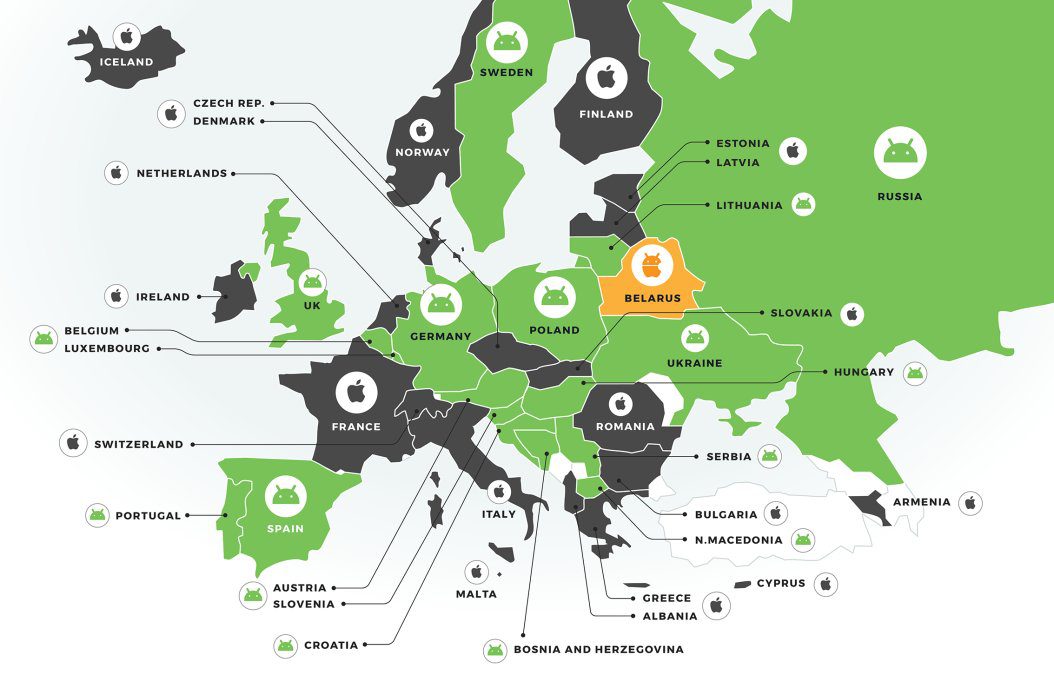 In South America, the divide is almost even. Five countries prefer android while four prefer Apple. In Peru, both Android and Apple-related tweets were 25% positive. 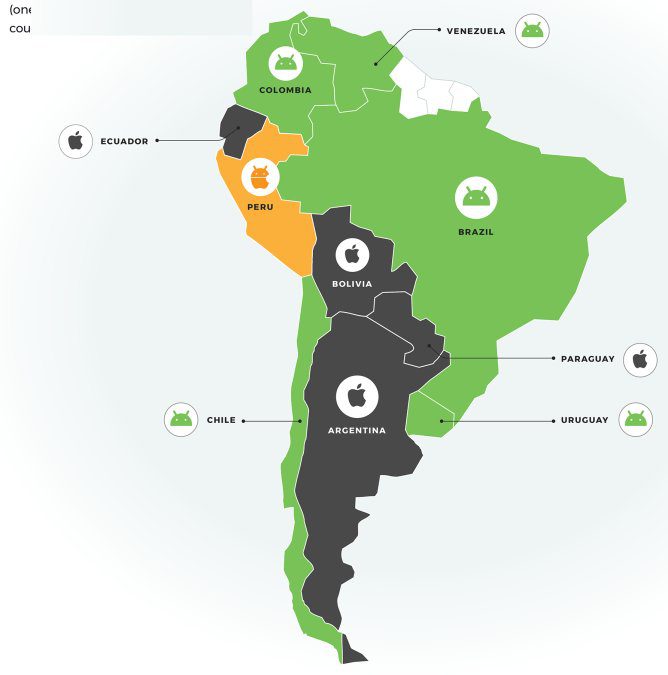