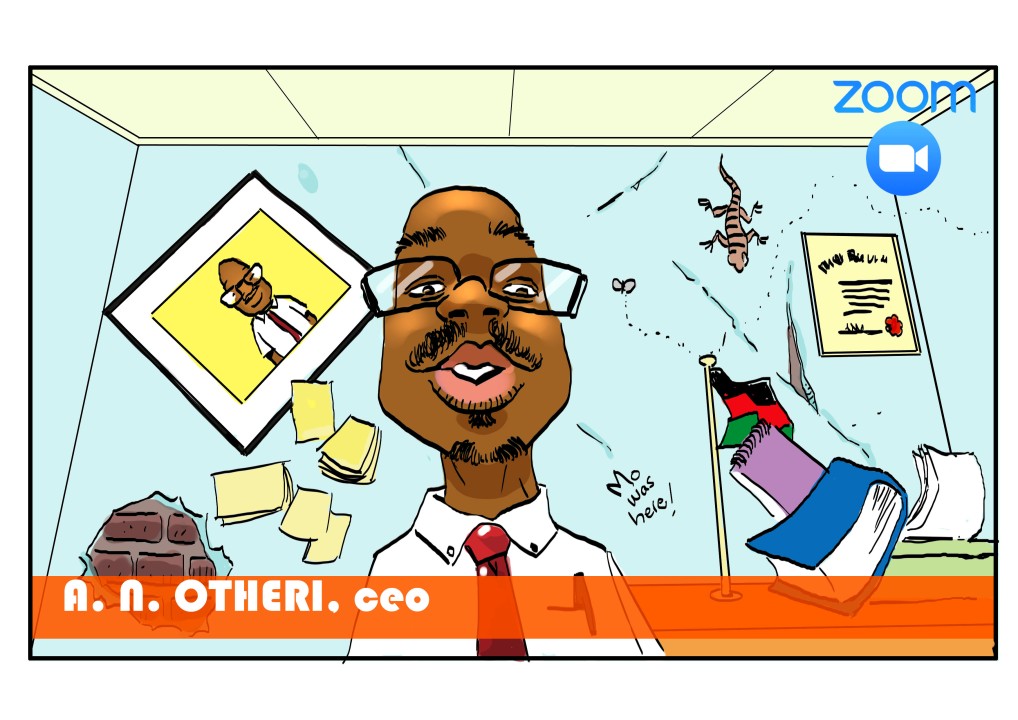 Years back, an associate of mine decided to work from home before it was the in thing to do, he converted the guest house into an office and would then walk across from the house to work. After a few days, he realised that his productivity had really dropped so he decided to find the reason why. First, he made sure to shower, shave and dress up in “work clothes” before going down for breakfast and then walking across to the office, this seemed to have had a marked improvement on his productivity but it was not yet back to the former high.

Next, he would do what he had done earlier and then in addition he would get into the car drive out of the compound and then reverse back into the compound before walking to the “office,” not to forget arming the vehicle buglar alarm. After a few days of doing this, he noted that not only had his productivity increased but it was even higher than before.

Over the past year, 2020, and now going into the second, 2021, we have been forced to embrace what many have referred to as the new normal as the pandemic changes our daily lives and working from home has become acceptable and for some mandatory. In the process, many old norms have been abandoned and new ones seem to be taking hold at breakneck speed and with little to no resistance as the pandemic continues to ravage the unsustainable lifestyles that we have been propagating.

Our obsession with face-to-face meetings that required travel across thousands of miles has instantly ceased being that critical and are being held comfortably online. The need to drive across town to hold a thirty-minute meeting to discuss what had already been shared on e-mail is promptly a scary proposition.

Ever since we laid fibre across the city of Nairobi, many of those in the IT space have been trying to get businesses to hold virtual meetings, but were met with excuses such as ‘it is not secure,’ ‘I need to see someone’s body language,’ and ‘there is nothing like a firm handshake to close a deal.’

Suddenly, none of those concerns applies as we have multi-million shilling transactions being swiftly executed fully online including the digital signing of documents. What has been most interesting is how adaptive people are when their lives are at risk. Unlike when issues such as air quality and fear of sedentary conditions did not have the same impact.

All the changes in norms are not all positive. Especially when it comes to the corporate image. For as long as I can remember, corporate dress codes were the standard yet today, that has been thrown to the dogs. People show up for meetings in their pyjamas or in their gardening clothes and it is acceptable! Things have even gotten to the point where faces are visible on camera without makeup, with not even a line of mascara.

Many of us went to school in uniform which built in us the need to dress in a certain way based on the occasion. This was inculcated in us. It also acted as a trigger based on whatever activity one was about to undertake. I doubt our brains have instantaneously reset to the new “home clothes” for work yardstick. I am, therefore, sure that when people attend virtual meetings and they find the boss dressed in loungewear they must find it very difficult to take what the boss is saying seriously.

But the most concerning issue apart from the clothes is the camera angles. Many use their laptops which gives the impression of one standing up on a board room table forcing the attendees to look up to them.

In my short stay in a psychology class, the behaviour of wanting people to look up at you was called narcissism and virtual meetings seem to have brought out the worst of it in many of us. More interestingly is that the attendees are forced to look up nostrils which normally result in distraction and stifled laughter as well as private chats. This has become the norm whether those attending are junior officers or board members. If this working from home is going to restore productivity and self-dignity, we need to stop lifting our noses up to the audience.

Having a CEO get on a public webinar with the camera looking up their nostrils and the background showing the toilet does not augur well for their image or that of their organisation.

For those who would like to restore the organisation and its staffs’ dignity, I propose the following;

1.      If the staff are using laptops, provide them with stands that place the camera at eye level so that they are looking directly at the camera as would happen naturally in a meeting room.

2.      Make sure that your people do not have a strong light source such as a window behind them. Otherwise, you end up with just a silhouette. If they cannot avoid it then supply them with a soft light to place in front of themselves.

3.      Note that most laptop cameras were not built for high resolution and thus fail to flatter most people’s images especially those of has with high melanin. Providing a high-resolution webcam, or, and DSLR for senior staff will make it feel like you are truly having a face-to-face interaction and not a 1920’s Charlie Chaplin skit.

4.      There is a good reason why most board/meeting rooms have fairly plain surfaces which reduce distracting those in the meeting. Let’s lose those bookshelves as the attendees will be busy trying to understand your reading habits, and instead get a plain background. If it is a publicly streamed event, use a background with the corporate colours as you would have done during corporate events where food and alcohol were served.

5.      Trying to turn your CEOs or senior managers into media equipment experts just won’t fly. Do you think that Elon Musk or Bill Gates operate equipment during their virtual meetings?

6.      Avoid using your laptop microphone or wearing those ugly headphones with a sticking microphone like a helicopter pilot. It is very unbecoming of any executive let alone the CEO. Instead, provide them with a good lapel microphone. Or better still, a USB dynamic microphone mounted on a microphone boom arm with a shock mount. If you really want your CEO to stand out then an audio interface with a monitoring speaker would be the best way to go.

I hope these pointers will help you bring back some dignity to your executives and staff as we get more entrenched into the new normal that is definitely here to stay. For a little longer.