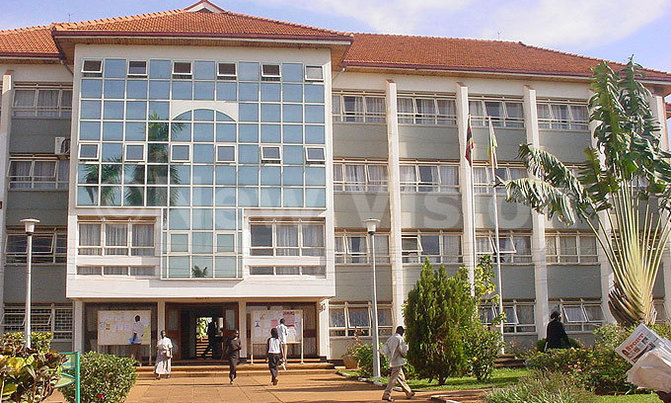 What started as row at a run-off the mill Information Technology firm, Zeenode Ltd, has morphed into a protracted legal battle over intellectual property rights, specifically a software that had streamlined university operations.

The duo have since then incorporated their own software company under the name, Honeycomb Technologies Ltd.

According to an affidavit filed on September 22 in the High Court Commercial Division, Mr Okuonzi, who doubles as the director of ICT Services at Kyambogo University, denies infringing on Zeenode Ltd’s intellectual property rights.

He states that he ceased being a director in the company in 2013.

This row has sucked in technocrats in the ministries of ICT and National Guidance, and Finance’s directorate of financial management services.

The first whiff of the dispute came to surface when Kyambogo University top management revealed that results and data of nearly 2,900 students due for graduation were deleted from the system.

The university held its 17th graduation ceremony for 9,521 students between Tuesday and Thursday last week.

These individuals enrolled at the university between 2006 and 2011 for telecommunications engineering degree courses, and upon graduation, they established Zeenode Ltd to design and vend software systems.

On April 12, Mr Bagiire, then as ministry of ICT permanent secretary, wrote to all vice chancellors of public universities and heads of other tertiary institutions notifying them about the contract termination with Zeenode Ltd.

He said those that wished to continue using the system after June should engage the system vendor individually.

Kyambogo University management, according to corroborated accounts, wrote to the vendor requesting to be switched off and any history deleted.

The university also requested for all students’ data which was handed over but in raw form.
“We were in panic as the graduation was a round the corner,” one university official familiar with the matter speaking anonymously told this newspaper.

People familiar with the matter say it is likely the university failed to process the raw data.

To find a scapegoat, a source said the university then falsely claimed that its former employees deliberately deleted students’ records.

Mr Philemon Weganga, a former Kyambogo University student, who became the executive director of Zeenode Ltd, states in an affidavit that together with five classmates, they created the software to overcome the defects of a manual system.

Before they invented the system, students queued to make payments and to obtain examination permits.

Upon graduation, they incorporated Zeenode Ltd, a firm with an advanced software system that could accommodate business processes of the university such as admissions, registration, management of academic records, and human resources.

The students presented the project proposal, the affidavit states, first to the supervisor and lecturer in digital systems, the late George Waligo, and then to the university’s Department of Electrical and Electronics Engineering, which approved it.

Waligo then suggested that Mr Okuonzi, who was the head of projects in the department at the time, supervises them.

After graduation, the project was pitched to the university management and it was granted the green-light.

The students secured employment elsewhere after graduation, but returned in 2012 to help rollout the customised system, known as E-Campus.

“The university always promised that at an opportune time we would discuss and that they would recognise and reward us for having invented E-Campus system. In implementation, they only paid us allowances to cover transport and airtime. They designated us ‘research assistants’ in the implementation project,” Mr Weganga stated.

The company directors did not sit on their laurels as the row with Kyambogo over the E-Campus system raged.

They designed another software programme, Zee Varsity that was vended to other universities, including Nkumba, Ndejje, Busitema, Mutesa 1 Royal, and Uganda Martyrs, in the subsequent years.

During this period, government was seeking to overhaul its data records and adopt an online systems across the board, from e-health strategy, e-immigration, e-visa, and other e-systems, with commencement of the second phase of the China’s EXIM Bank-funded national data transmission backbone and e-government infrastructure in 2013 after phase one, which started in 2011.

This followed repeated red flags raised by the Auditor General about financial leakages at universities where especially tuition would be siphoned by officials or unaccounted for.

The Finance’s Computerised Education Management and Accounting System (CEMAS) was introduced in 2014/2015 and first rolled out at Makerere University and Mbarara University of Science and Technology, MUBS, and others.

The Finance ministry, which was at the time under donor pressure to strengthen the automated Integrated Financial Management System to improve efficiency in budget preparation, execution and financial reporting, some sources say, spent several millions of dollars on the system.

But it wasn’t long when it was beset by glitches. The Abel Rwendeire visitation committee on Makerere University in its report to President Museveni in 2017 detailed that the implementation of CEMAS was marred by numerous challenges.

During the same year, the university also turned to Zeenode Ltd to fine-tune its new system.

From boom to burst

After the success story of the E-Campus software at Kyambogo, technocrats from the ministries of Finance and ICT in early 2017 approached Zeenode on how to fine-tune CEMAS, which culminated in discussions of modifying and customising the Zee Varsity system with more functionalities to replace CEMAS. The new system was christened AIMS.

On July 4, 2017, the former ministry of Finance Permanent Secretary, Mr Keith Muhakanizi, wrote to all heads of tertiary institutions informing them of the decision to migrate from CEMAS to AIMS.

“Technical guidance from the ministry of ICT and National Information Technology Authority (NITA) is that AIMS is robust with functional capabilities that meet the business requirements of all public universities and tertiary institutions as were initially conceived under CEMAS,” Mr Muhakanizi wrote.

Subsequently, in August 2018, the ministry of ICT contracted Zeenode Ltd for two years with government paying the latter Shs30,000 per active student on the system.

Implementation started at Mbarara University of Science and Technology and expanded to 10 public universities.

The contract also detailed that the source codes–commands of an executable computer programme–shall be an intellectual property of Zeenode Ltd.

In March 2019, Mr Bagiire wrote to all vice chancellors indicating the ICT ministry would cater for the AIMS–system support, maintenance, and upgrades–for two FYs 2018/2019, and 2019/2020, after which each institution would bear financial responsibility for its own system.

In another October 19, 2019 correspondence, Mr Bagiire praised the system to have weeded out inefficient and manual systems “thereby creating savings and efficiency gains.”

Separately, in a June 2020 project report to the ICT ministry, several achievements, including an increment in universities revenue collections amounting to Shs4.8b, administrative efficiency, user convenience and real time reporting of financial, academic, administrative and human resources information, were detailed.

Towards end of the contractual 24 months in June 2020, the company wrote to Mr Bagiire demanding payment of outstanding debt to the tune of Shs 6.6b.

A contract extension was signed on December 15, 2020 until June 2021 during which the ministry would pay the company Shs200m per quarter or a total of Shs800m in the new contract.

With the outstanding balance not paid, the company disconnected some universities from the system in November 2020, which the ministry protested in a December 11, 2020 correspondence.

And on April 12 this year, the ministry notified all universities that upon extension of the contract, those intending to use the system should deal with the company directly.

Zeenode sued the Ministry of ICT through the Attorney General for, among others, breach of contract–failing to clear the outstanding balances amounting to Shs8b.

The firm also accused the ministry of connivance between its officials and former staff, Mr Tumusiime, to manipulate call off orders–an order placed by a procuring entity under general terms and pricing on a range of goods under framework agreement, without having to negotiate terms every time–during which the ministry was [under] paying the company for 50,000 students hosted onto the AIMS yet the system served close to 120,000 students across all universities. The company dismissed Mr Tumusiime in December 2019, and twice in 2020 published notices in the newspapers warning the public against dealing with him on their behalf, and subsequently filed a criminal complaint at CID for, among others, obtaining money by false pretence.

Mr Bagiire in the affidavit filed by the Attorney General on August 22 says after CEMAS was beset by challenges, they benchmarked Kyambogo’s successful E-Campus and for which the university had the copyright for the software.

He also states that at all times, the Zeenode Ltd directors, Mr Okuonzi and Mr Tumusiime were employed or commissioned by the university while working on the E-Campus.

“AIMS is used universally to refer to systems that support the automation of business processes of academic institutions,” he stated.

Mr Bagiire said on June 27, 2017, Kyambogo University Vice Chancellor, Prof Eli Katunguka, wrote to the ICT ministry that they were agreeable to upgrading E-Campus for use by all public universities under a framework contract, and in another July 11 correspondence he wrote nominating Zeenode Ltd as a “process partner identified by NITA to contribute to development of AIMS.”

Mr Bagiire denied copyright infringement by Zeenode Ltd over the system stating that its acronym “AIMS” merely conveys an idea or concept regarding digital enhancement of efficient management systems for academic institutions.

Zeenocode Ltd jointly sued Makerere University after the Vice Chancellor, Prof Barnabas Nawangwe, in December last year wrote to the ministry of ICT expressing interest to replicate the system–AIMS 2.0–which he said could be later reproduced by other universities.

Zeenode in the suit contends that “AIMS 2.0” in its technical and common understanding means an upgrade of its system. Both Kyambogo and Makerere universities have now moved from AIMS to another system, the Academic Management Information System (ACMIS), which they say will give them more control over student information.

The Kyambogo Deputy Vice Chancellor, Mr Fabian Nabugoomu, in the affidavit filed on September 23, says the idea of E-Campus was crystallised at the university and was later improved by telecommunication engineering students in 2011. “The computer programme that forms part of AIMS were originate and authored by Kyambogo University which owns the intellectual property rights in the same and it is these programmes that were rolled out by government with Zeenode nominated by the university,” the affidavit states. Hearing of the case at the High Court Commercial Division in Kampala before Justice Stephen Mubiru started last Thursday and was adjourned to November at the request of lawyers of Kyambogo to prepare adequately.

The legal contestation not withstanding, highly placed sources told Daily Monitor that a forensic audit needs to be sanctioned as the ministries of Finance and ICT have spent billions of shillings on various online systems but with each melting into crisis.