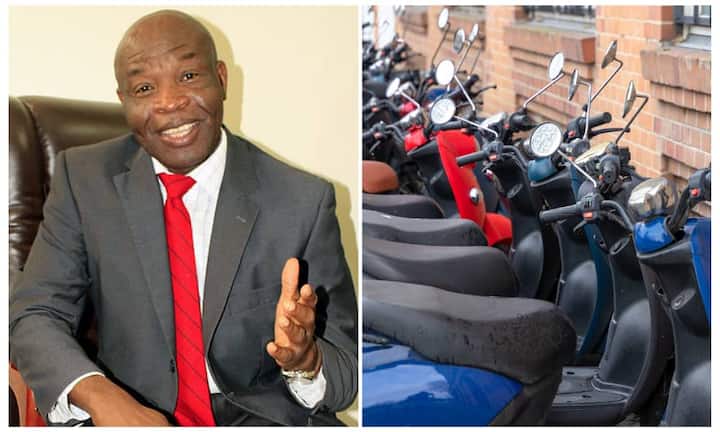 A Nigerian scientist and engineer have led a team of researchers to develop electric motorbikes in Uganda. Professor Emeka Akaezuwa who is the Vice-Chancellor of the International University of East Africa based in Kampala said that his team used local talents in building the Motorbikes.

According to Prof Emeka, the aim is to create jobs in the country as the motorbikes have been proven to be viable and are already on the roads in Kampala.

Prof Emeka, who is a scientist and an engineer led the team to develop the bikes as an answer to fuel problems in the East African country, which the Ugandan President, Yoweri Museveni described as groundbreaking and a departure from the use of petrol vehicles.

“Our whole philosophy about this is to produce electric motorbikes in Uganda, to develop products and solutions for transportation in Uganda based on mobility, using clean energy,” he said.

“We have created e-motorcycles to enable us to create jobs here in Uganda, and develop the capacity and the talent to build technological solutions in the area of transportation,” Emeka added.

He said the electric motorbikes are already on the roads in Kampala, the Ugandan capital as they are piloting them, saying that research has shown that the motorcycles are very viable and that they can be built in Uganda using local talents.

As the world pivots to clean energy, many countries are moving towards electric vehicles and Uganda has been seen to be moving in that direction, spearheaded by a Nigerian professor. The International Energy Agency said the UK will phase out petrol vehicles by 2030, as the movement for clean energy gathers steam. This also comes as more oil companies are divesting from Nigeria and other oil-producing nations and are exploring clean and renewable energy.

In a televised national address recently, President Yoweri Museveni said shifting to electric vehicles is one of the long-lasting solutions Uganda needs to adapt, in order to cope with the current high prices of petroleum products.

“The correct way is to start moving away from petrol to electric cars. This is the solution to go for. The good thing is, we have started manufacturing electric buses here,” he said.

Museveni told a high-level retreat for the East African Community (EAC) Council of Ministers that instead of lamenting about the current high fuel prices, they should be seen as an opportunity to switch to electric vehicles.

“The fuel crisis is also an opportunity. In Uganda, we have started making electric cars called Kiira. We must now upgrade this project to make electric cars,” he added.

Consumers are apparently positively inclined towards passenger and commercial electric vehicles (EVs) even on the African continent. This preference, as elsewhere, is driven by rising environmental consciousness and the recent spike in fossil fuel prices.

Rapid urbanization, change in lifestyle, the surge in investments and increased consumer spending will positively impact the electric vehicle sector. But the cost of charging stations remains a challenge, especially in Uganda’s rural areas where there is a scarcity of electricity supply.