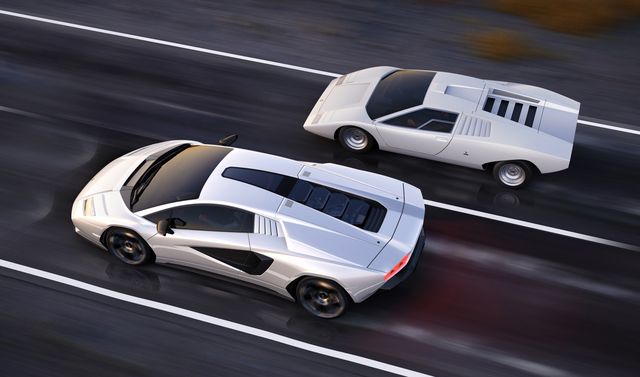 The Lamborghini Countach is a car that cemented a legacy so strong, it has been living on in the minds and hearts of enthusiasts ever since it rolled off the production line. The car was a must-see on the walls of car lovers who famed it for its accentuated designs, paired with exotic engine sounds. The very nature and appearance of the car was the starting point for a revolution in Italian car design, it was the “Italian Wedge” shape, that has been the silver lining in Lamborghini’s design, almost 30 years later.

Now, the sports car manufacturer has done what many had thought was previously undoable, and has dusted off the classic nameplate of the Countach, and created a brand new car. Lamborghini actually did it, they went were no carmaker should, and that is remaking an old classic that was almost revered in the car community. The only difference is, they have done an absolutely smashing job of remaking it. For the first time in the history of Lamborghini supercars, they have remade arguably the exotic car that created the supercar segment.

The new Countach will run on the familiar 6.5-liter naturally aspirated engine develops 769 horsepower (573 kilowatts) on its own, but it has help in the form of a 34-hp (25-kW) electric motor powered by Lamborghini’s 48-volt supercapacitor tech. With everything combined, the Countach cranks out 803 hp (599 kW) to all four wheels through a seven-speed gearbox.

The revived Countach will also boast a 48V electric motor, indicating that the supercar will retain its familiar engine growl while also receiving some of its power from electrons. According to Lamborghini, the thermal unit will have an output of 780cv (a metric unit of horsepower that translates to 574kW), while the e-motor will generate 34cv. That produces a 0–100km/h time of 2.8 seconds, a 0–200km/h time of 8.6 seconds, and a top speed of 355km/h.

Only 112 of the vehicles will be produced, making it an ultra-exclusive car. The famous raging bull that Lamborghini signifies is reviving its supercar line up, and the ultimate revival is the bringing back of an old legend, it is safe to say that the Countach is more than a car at this moment, it is a story, filled with passion and emotion, when Lamborghini created the most memorable car ever. Now, the Countach is back, and with big boots, or should we say, tyres to fill.