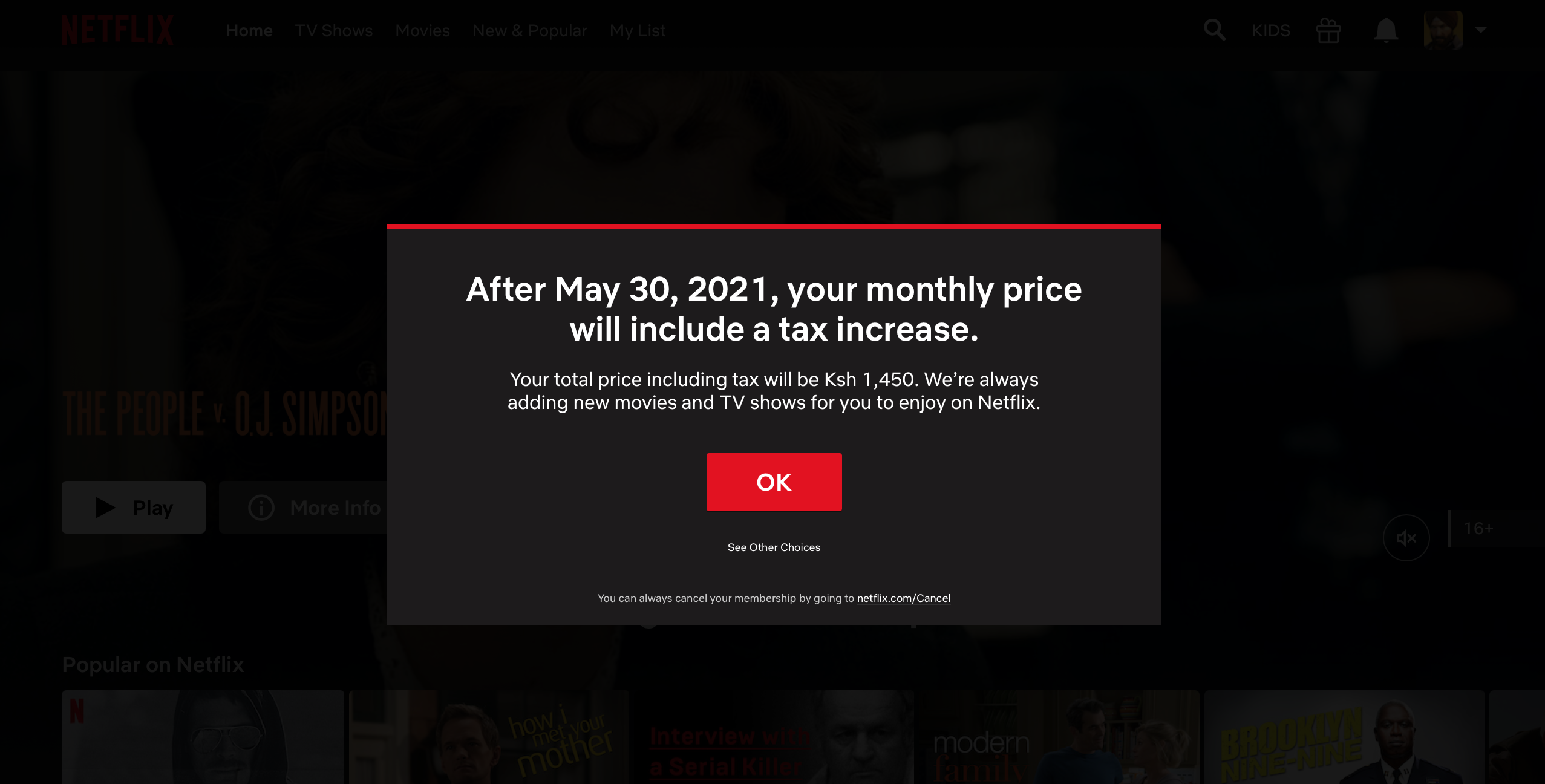 Kenyans have now begun to feel the pinch of the newly introduced digital service tax, having to pay more to access the online services.

Online streaming platform, Netflix, subscribers for instance will begin paying Sh250 more from May 27 2021.”After May 27 2021, your monthly price will include a tax increase, the total price will now be Sh1450,” read a statement on the app for users on the Premium plan

Users on the Standard plan will pay Sh,1100 starting May 27 from Sh950 while those on the basic plan will pay the usual Sh700. The increasing cost of the service has been slowly pushing people out of Netflix which some now consider a luxury. This will create a ripple effect across Netflix’s teams, because it has been noted how aggressive they are in retaining customers, this would mean they will have to find a way to appeal to Kenyans to keep watching despite the increase in costs.

Despite their hard-hitting strategies, Netflix subscriptions slowed to 3.98 million between January and March, a significant drop from the company’s 6 million projection.The streaming app attributed the drop to lack of new shows and expressed optimism that it would recover as sequels to new shows are released.

Other streaming platforms such as Showmax, Primevideo, Hulu are yet to increase their costs.Delivery platforms have also seen a slight increase in total costs of between Sh5-10 due to the new tax but they are not easily quantifiable.
For instance on UberEats, in the receipt breakdown, delivery costs have been divided to service fee, small order plus cost of the food items, this broken down costs include the digital service tax.

Online booking holiday homes business could also feel the impact of this new tax according to online booking platform, Airbnb. According to the firm , hosts in Kenya are supposed to pay VAT and income taxes and may also be subjected to other taxes or duties where applicable.

For those who offer the service online, the digital service tax might come applicable, which could lead to an increased booking cost for the holiday homes.Taxi-hailing platforms such as Bolt, Uber and Litle cab however are yet to review their pricing formulas to factor in the new tax.

The digital service tax (DST) took effect from January 1 2021 and is charged at 1.5 per cent tax on income generated through digital transactions.According to KRA, the DST establishes a level playing ground for all business and also expands the tax base to a significant extent.