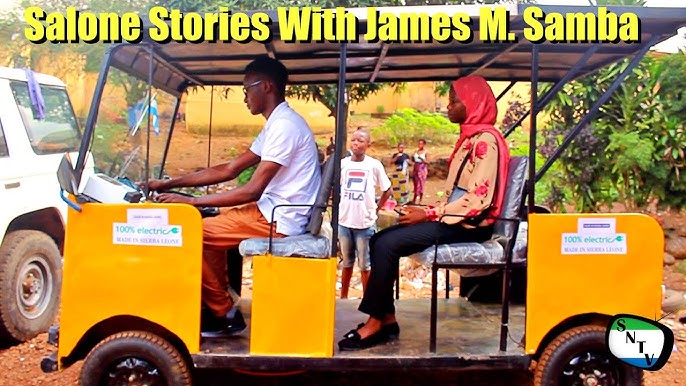 Sources at SwitSalone.com, say James Samba explained the full potential of his self-made electric car. He stated that the vehicle was inspired by his uncle who is handicapped.  Samba became fully dedicated to finding a solution for his uncle’s  condition knowing that it is a recurring problem.

“This electric vehicle was inspired by my uncle who is disabled. His struggle for movement pushed me to my limits.” James Samba, the 20-year-old innovator in Sierra Leone is quoted to have said.

According to the source, Samba built the electric vehicle from about 50 percent locally sourced materials. The Electric Shuttle mini-bus is powered by a self-installed solar panel or an external electric source.

“Samba confirmed that, with a post-test, the vehicle could cover a distance of up to 150 km (93.206 miles) when fully charged, and can additionally cover 100 km (62.137 miles) with direct solar-assisted power. He added that the Electric Shuttle Mini-bus could run up to a speed limit of 80 km/hrs, a limit set for safety purposes”, adds the source.

“The speed range is about 60-80 km/hrs, a limit set for safety proposed since I designed it for commercial use. The vehicle can cover 150 km when fully charged with an extra 100 km with solar support.” Samba further said.

Samba also guaranteed that the Electric Shuttle Minibus should be expected to be in full commercial use in the next two months after registration and other legal terms are met. Amid global fuel crises, Samba mentioned his ambition to create more electric vehicles in the coming years if he gets all the support needed.

Samba is a self-taught mechanical engineer, Innovator, Entrepreneur, and founder and CEO of Wanjama Innovatives, an innovation company founded to transform innovative ideas into reality.

In 2021, he won the Southern Region Social Good Summit Price of NLE 10,000. During the Covid-19 pandemic, Samba also created an automated hand washing station, for safe contactless public hand washing. Earlier this year he also developed a solar-powered wheelchair for persons with disabilities.